The 3437A is a System Voltmeter, or a voltmeter that is intended for automatic, computer-controlled measurement applications. It is a 3.5-digit instrument. The instrument is very fast for its time, at 5700 samples per second. HP's rationale for this precision vs speed trade-off is that many automated test applications require speed, whereas comparatively few require precision greater than 3.5 digits. HP sold a vast number of 3437As, so it seems they were correct.

The instrument can perform from 0 to 9999 samples per trigger event, and it has a configurable delay from triggering to sampling of 0 to 1 second in 100ns increments. It has a 100% overrange capability on its three voltage ranges, hence the 20V specified in parenthesis in the Info box on this page.

The 3437A outputs its data via HPIB, in either ASCII or packed binary format.

One drawback to this design is its triaxial BNC input connector. See the photo below. While triaxial BNC connectors and cables have very real advantages, they are expensive and can be difficult to procure. The photo below shows a 3437A in operation using a Pomona model 5300 triaxial to coaxial BNC adapter.

The 3437A isn't generally viewed with much respect in the general modern test equipment user community, but it is a solid instrument that's capable of getting real work done, especially in the context of an automated measurement system. 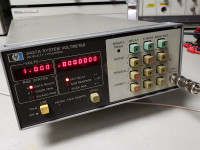 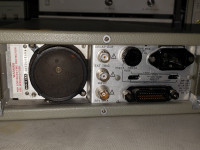 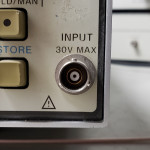 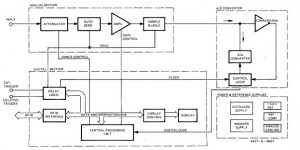