The 4270A is an auto-balancing digital capacitange bridge with a measurement range of 18pF to 1.2uF. It can apply a DC bias to the capacitor under test of 0VDC to 200VDC in two ranges (0VDC - 20VDC, 0VDC - 200VDC), or from an external source. Its measurement frequencies are 1kHz, 10kHz, 100kHz, and 1MHz, selectable via a front panel switch. It places a maximum of 1Vrms across the capacitor under test, and has a typical bridge balancing time of 500ms.

The 4270A uses Nixie tubes and neon indicators for its display, and has two separate groups of digits for its C (capacitance, five digits) and D/G (dissipation factor/conductance, four digits) displays.

The instrument has a BCD data output on its rear panel, of the form typical of digital instruments of its era. In addition, most of the front panel functions can be controlled via an interface on the rear panel. 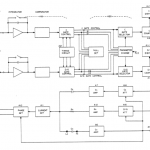