A set of tools for troubleshooting logic circuits. This kit includes 545A Logic Probe, 546A Logic Pulser, 547A Current Tracer, 548A Logic Clip, and a padded case. The items in the kit are discussed in the December 1976 issue of HP Journal.

545A Logic Probe: An incandescent bulb indicates the logic state of a signal. Lamp states are: Off (logic low), Dim (open circuit, or level between lo and hi), Bright (logic high), and Flashing (signal is pulsating). Supports TTL (up to 80 MHz), DTL, RTL, HTL, MOS, CMOS (up to 40 MHz), and HiNIL signals.

546A Logic Pulser: Used to inject a signal to stimulate a circuit. Using the button, it is possible to inject a single pulse, or strings of pulses at rates of 1 Hz, 10 Hz, or 100 Hz. The pulser is intended to overdrive a circuit node to briefly force the opposite logic state. In a TTL circuit, it drives up to 650 mA for at least 0.5 uS.

547A Current Tracer: This unit has a tiny and sensitive non-contact current probe in the tip. An incandescent lamp shows the detected current behavior, with a pot to adjust the sensitivity. The behaviors of the lamp include variable brightness and blinking (to indicate a pulsing signal). Example usage: The Current Tracer can be used to find a stuck-low driver on an open-collector bus with multiple drivers, by identifying which trace/device on the node is sinking extra current.

548A Logic Clip: Clips onto a 16-pin (or fewer) DIP package, and indicates the logic state of each pin in real time. It draws power from the device pins, without being “aware” of which pins are Vcc or Ground. 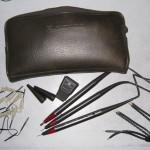 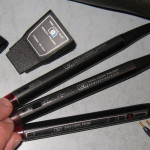 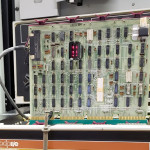